Research conducted by GoCompare had already revealed that drivers of luxury car brands such as Audi, BMW, or Mercedes were most likely to be convicted of a driving offence or cause an accident on the road. Here at Click4Reg, we’ve decided to gauge public opinion and find out what people think of different car brand drivers. We’ve consulted Google search trends and surveyed 2,000 people in order to determine who the best and worst drivers by car brand are in terms of their reputation.

The Results of Our Worst Drivers by Car Brand Survey

The survey found that drivers who were most likely to commit offences on the road or cause accidents also had the worst reputations overall.

It seems BMW drivers can’t shake off their bad rep. Not only did 82% of respondents say they dislike drivers of the German car brand, more than 80% said they expected BMW owners to be aggressive drivers.

What’s more, a quick Google search on BMW drivers is just as revealing. The top suggestions Google comes up with when it sees the words ‘why are BMW drivers‘ typed into its search bar are: 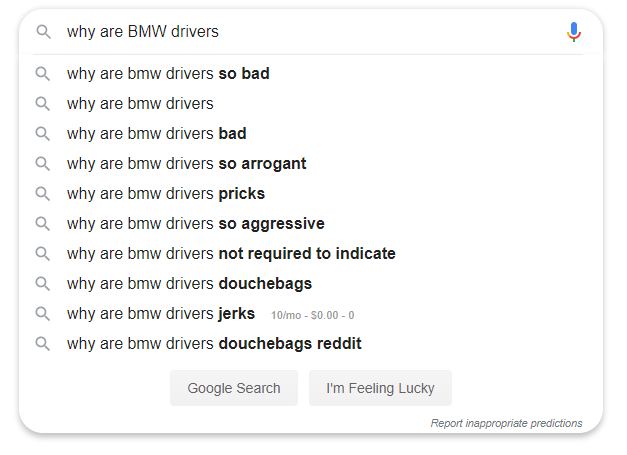 The second worst drivers by car brand when it comes to their reputation are Ford owners. Over 75% of respondents said they dislike Ford drivers and 60% agreed that drivers of the US-made car are prone to road rage.

When it comes to Google search trends, the search engine suggests some pretty unflattering queries if one looks up Ford drivers’ reputation. 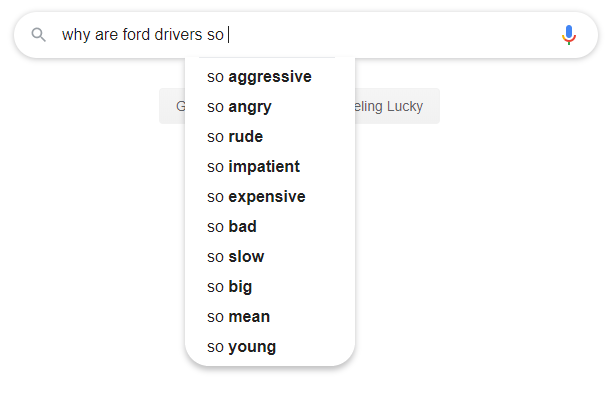 People seem to have mixed feeling when it comes to Audi drivers. While 50% of respondents said they dislike Audi drivers and 71% felt owners of the German car would drive fast, 75% agreed that Audi owners are generally good drivers.

When it comes to Google suggestions though, things are more clear-cut: 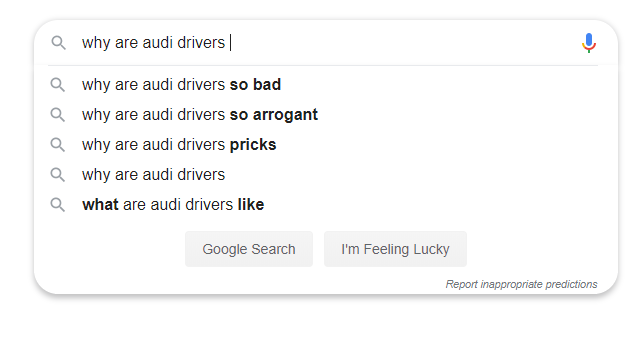 On the other end of the spectrum, we have Volkswagen drivers. 68% of those surveyed said they like Volkswagen owners even though 60% thought of them as bad drivers.

An even better reputation is held by Toyota owners. Of those who participated in the survey, only 10% said they dislike Toyota drivers. What’s more, 85% said they would date someone who owned a car made by the Japanese manufacturer.

The survey results, which saw over 60% of respondents agree that Toyota drivers had a reputation for being slow are also corroborated by the top Google search suggestion for the words ‘why are Toyota drivers’.

Highlights of Other Brand’s Results:

What Can You Do to Improve Your Favourite Brand’s Reputation?

There isn’t much you can do to improve the reputation of your preferred brand if you’re a BMW driver for example. Improving the way you drive and the way you treat others in traffic is definitely a start, but such deep-seated perceptions are not easily altered.

Installing a vanity license plate on your vehicle could send out a message to other drivers that you’re not like most Ford owners – but we’re not sure many would believe you! Nonetheless, you can browse our custom plate selection and decide if anything fits the bill! Furthermore, if you don’t want to break the bank but would still like a custom plate, check out our guide on how to find cheap number plates.

But thanks to Click4Reg, and the exhaustive efforts of Sales Manager...