From England's classic Rolls Royces to Italy's iconic Ferraris, cars come in a wide range of shapes, sizes and styles. But which car is statistically the most beautiful according to science? We sought to find out once and for all using the golden ratio which cars are the most visually pleasing. Dating back 2,500 years, the golden ratio is a mathematical equation used as a benchmark for ideal proportions. Historically it was used by architects and artists in pursuit of perfection and Michelangelo was a big fan – he used the ratio when painting The Creation of Adam on the ceiling of the Sistine Chapel.

Now, it’s often used to analyse the beauty of human faces but we decided to change it up a little to study the ‘faces’ of cars.

How we did it

We utilised an official ranking list from Autocar.co.uk which detailed the 50 most beautiful cars ever made. We then examined each car’s vehicle specifications to identify each vehicle’s height and width against the golden ratio formula of 1.61803398875.

From this, we were able to determine how close each car’s dimensions are to the golden ratio. In essence, the smaller the percentage difference, the more statistically beautiful the vehicle.

The top 20 most beautiful cars according to the golden ratio 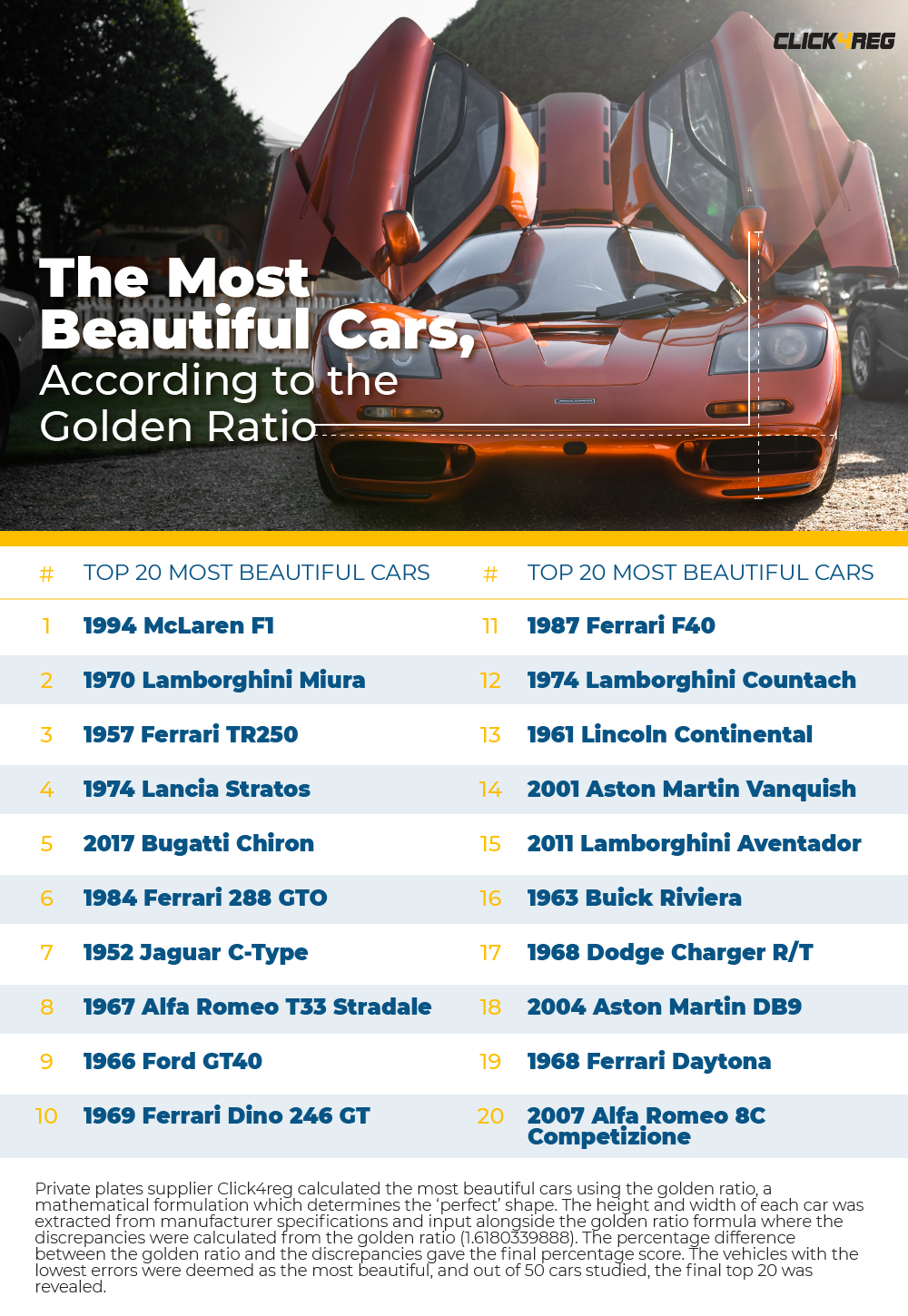 The most beautiful car according to the golden ratio is the 1994 McLaren F1 as it earned the lowest percentage difference of 1.33%. This supercar model is not only deemed to be ahead of its time thanks to its bodywork, but it was also hailed the world’s fastest car during its launch and considered to be a technological masterpiece.

With a percentage difference of 1.94% from the golden ratio, the 1970 Lamborghini Miura puts the supercar in second place. The Miura was the fastest street sports car produced during its time and is still considered to be one of the most beautiful cars ever made even after more than 50 years since its production. 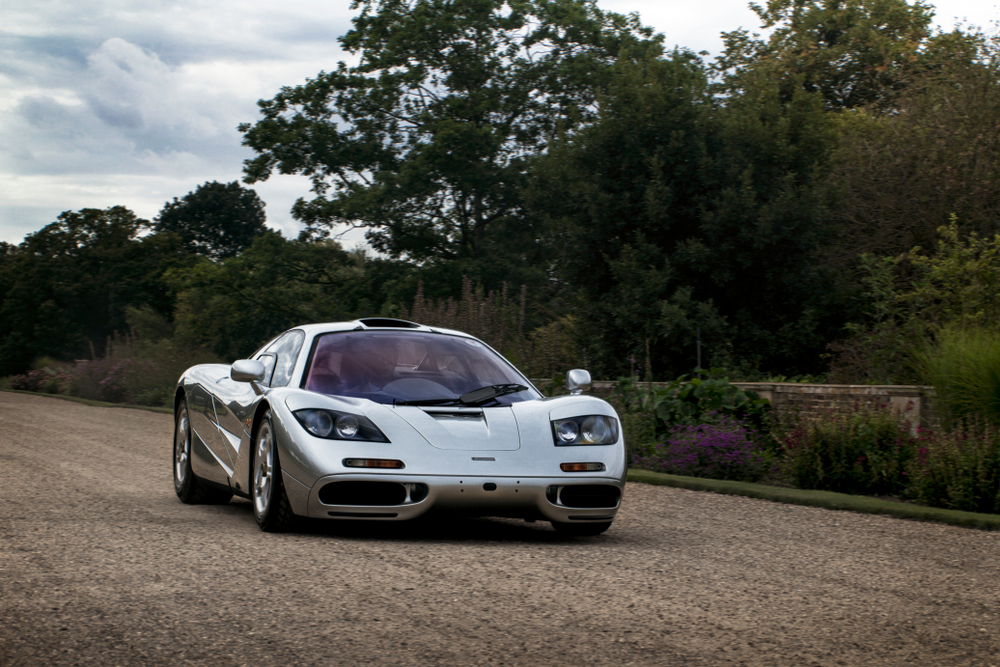 Following in third is the 1957 Ferrari TR250 with a percentage difference of 2.36%. The 250 Testa Rossa sports car was designed for competing racers in response to the enforced maximum engine displacement of 3 litres on prototypes for the 24 Hours of Le Mans and World Sportscar Championship races, ultimately achieving multiple wins in the following years.

Coming in fourth is the 1974 Lancia Stratos with a 2.56% difference from the golden ratio. The Lancia Stratos is a two-seater fixed-head coupé with a width of 1750 mm and a height of 1110 mm, designed by Marcello Gandini at Bertone. 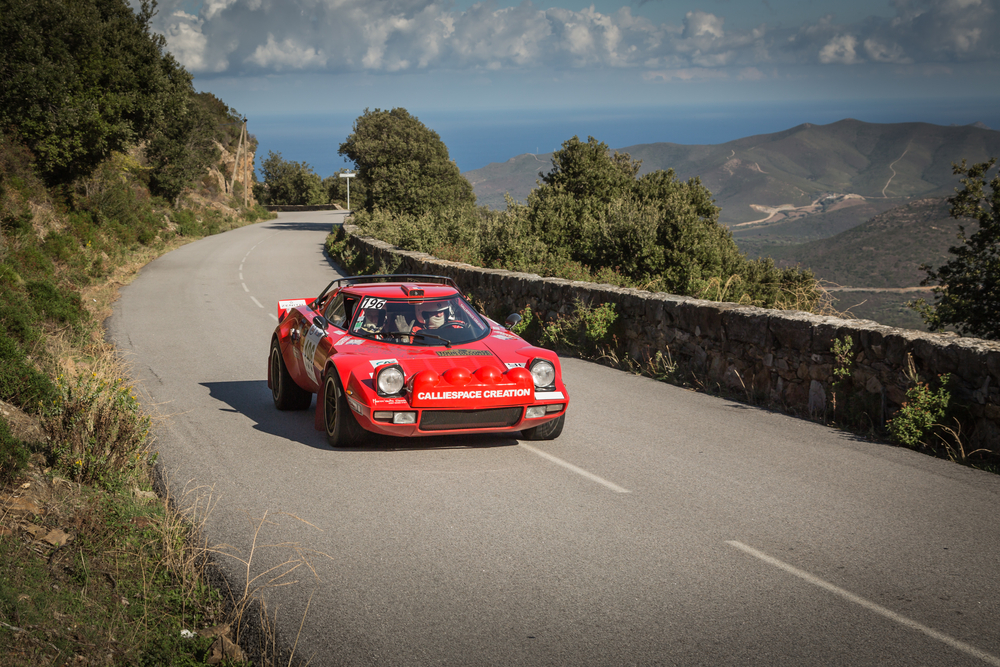 Rounding off the top five is the 2017 Bugatti Chiron – the newest car to feature in the top 50 overall. With a width of 2038 mm and a height of 1212 mm, the Chiron model achieves a 3.92% difference from the golden ratio.

The Ferrari 288 GTO, also known simply as Ferrari GTO, is a two-door Berlinetta. With its seemingly inexhaustible power (2.8 litres and eight cylinders), the engine made the GTO the closest thing to a racing car. With a width of 1910 mm and a height of 1120 mm, this vehicle has a percentage difference of 5.4% from the golden ratio, thus ranking in sixth position. 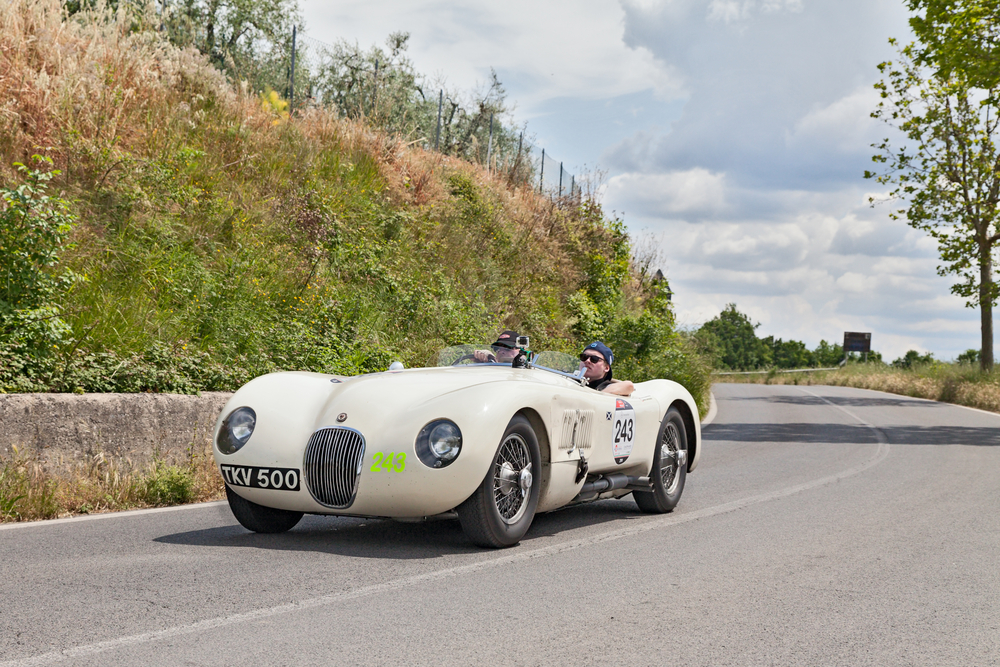 The Jaguar C-Type (the "C" stands for "competition") is a racing sports car built by the British luxury car brand, Jaguar Land Rover. With a width of 1638 mm and a height of 1080 mm, the C-Type achieves a 6.26% difference from the golden ratio.

Not only is it a winner in the beauty category, but the C-Type was also successful in racing - most notably at the Le Mans 24 hours race, which it won twice.

Following in ninth is the 1966 Ford GT40 with a percentage difference of 6.79%. The GT40 was launched by Ford Motor Company to win long-distance sports car races against Ferrari, and broke their streak in 1966 and won the next three annual races. 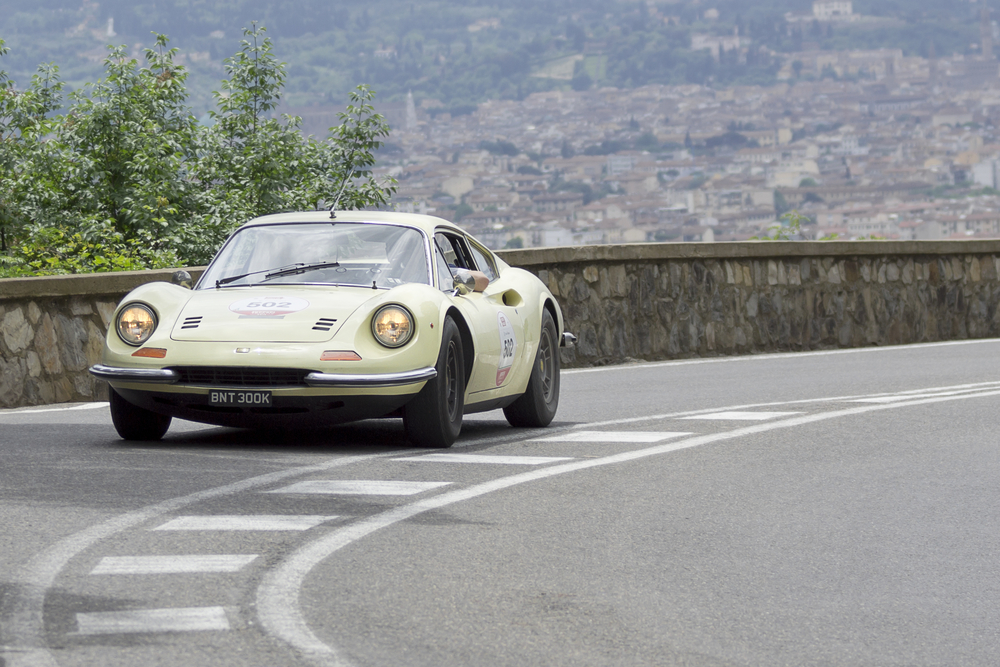 The Dino 246 was the first automobile manufactured by Ferrari in high numbers. It is praised by many for its intrinsic driving qualities and groundbreaking design. Therefore, it should come as no surprise that this model rounds off the top 10 most beautiful cars according to the golden ratio.

Which car manufacturer produces the most beautiful cars? 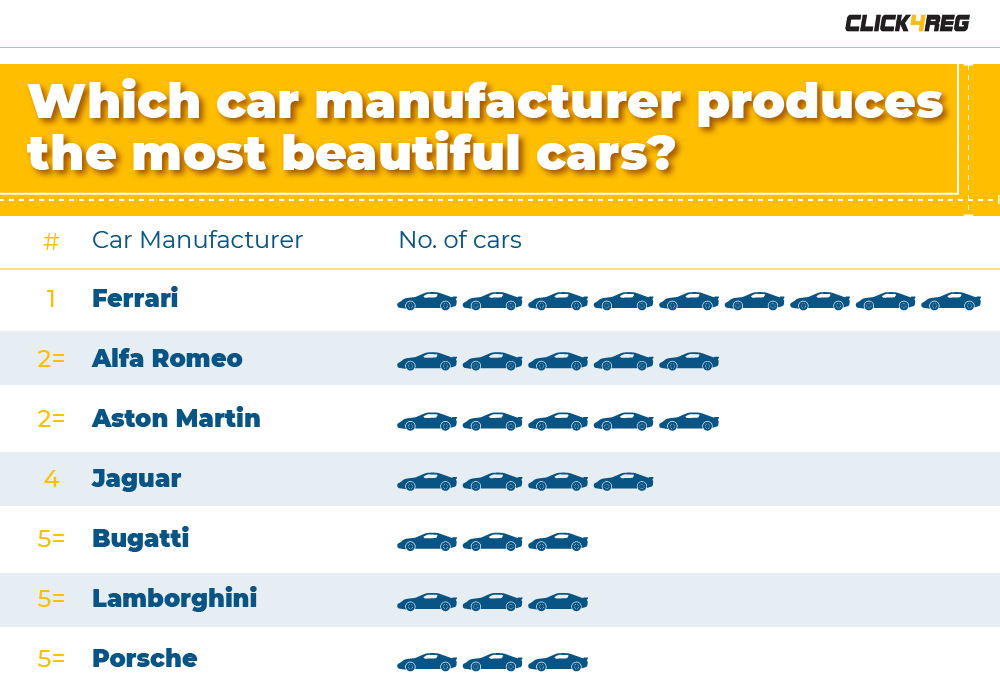 Ferrari is one of the automotive world's most evocative names, so it should come as no surprise that the luxury Italian sports car manufacturer, based in Italy, has produced the most beautiful cars. Of the top 50 most beautiful cars, nine Ferraris feature overall and three feature within the top 10, including the 1987 F40 which is the best Ferraris of all time according to AutoExpress.

Following behind with five cars listed are Italy’s Alfa Romeo and British luxury sports car brand, Aston Martin, featuring in the top 50. One of these is the Aston Martin DB5, which is renowned for being the third, but most recognised, James Bond car, which sits in 39th.

The luxury British vehicle brand of Jaguar Land Rover comes next, with four models listed among the top 50 most beautiful cars. One car, the 1952 Jaguar C-Type, sits in the top 10.

When were the most beautiful cars produced? 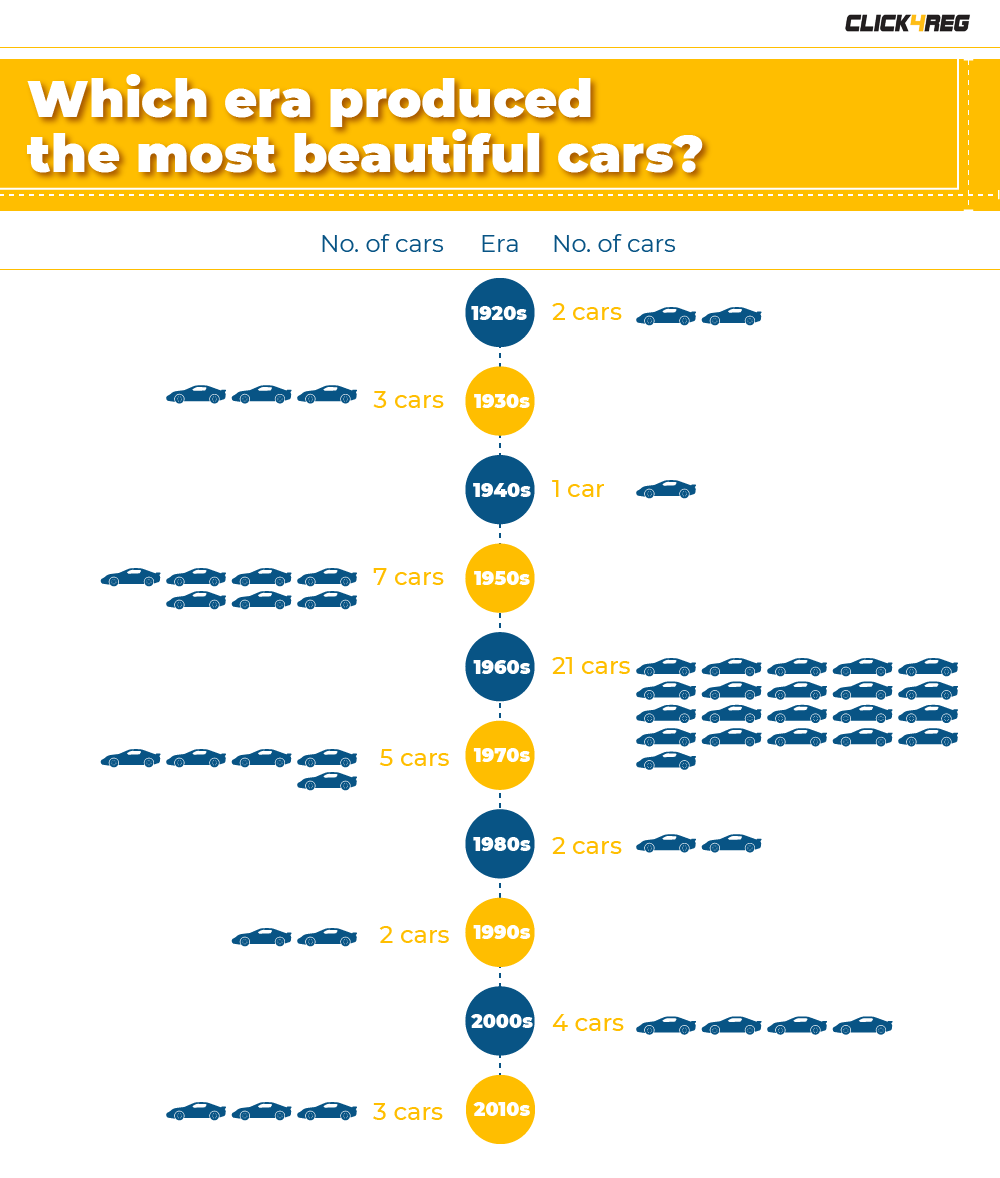 The 1960s was a busy year, including the first man landing on the moon, but it was also a busy year for cars too. According to our analysis, the most beautiful cars were produced in the ‘60s, with 21 out of 50 being created in this time.

This was followed by the 1950s with seven of the most beautiful cars being made in this era, and the ‘70s thereafter with five.

Surprisingly, despite the advancements in technology in recent years, the 2000s and 2010s only featured four and three models in the top 50 from these periods, respectively. It goes to show, nothing beats an old classic.

1. Click4reg.co.uk utilised an official ranking list from Autocar.co.uk, detailing 50 of the most beautiful cars ever made.

3. Once the data was collated for each vehicle, these were input alongside the golden ratio formula (a mathematical formula that determines the ‘perfect’ shape) where the discrepancies were calculated from the golden ratio (1.6180339888).

4. The percentage difference between the golden ratio and the discrepancies gave the final percentage score which ranked the vehicles from highest to lowest accordingly.

5. The vehicles with the lowest errors were deemed the most beautiful.