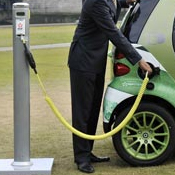 For the past few years, there’s been increasing interest amongst some motorists for electric cars and their future use. And, these vehicles are increasing in presence too, with models being brought to market and a rising number of destinations installing recharge points. Now, electric car enthusiasts will come together at Malvern to discuss the future potential of these newer vehicles.

In its inaugural meeting, the Malvern Hills Electric Automobile Association (ElectrAA) is hoping to attract as many people as possible. To be held at Malvern Theatres, those with an interest in alternative cars will have an informal lunch first, followed by the meeting from 1pm to 5pm. Mike Morgan, the Malvern Hills District Council chair will open the discussion, whilst it’s hoped that the group’s patron, MP Harriett Baldwin, will also be in attendance.

Enthusiasts and those interested in alternate vehicles will be treated to a talk from Robert Llewellyn, entitled ‘Electric cars are rubbish…aren’t they?’ Another talked called ‘Ecotricity, the electric highway’, will be given by Simon Crowfoot. But it won’t only be discussions to enjoy, but a range of electric cars, too. In the nearby Priory Road car park, a variety of vehicles will be showcased, including the Renault Zoe, Nissan Leaf, Tesla, Mazda, BMW i8 and i3 and the Morgan Plus E.

The group’s secretary, Dan Wild, said, “2014 promises to be an exciting year in the field of electric-powered vehicles. Malvern Hills seems an ideal area for this since the district council installed chargers with free supply, and the local population has a high proportion of active and retired scientists and academics. This group makes an obvious initial target for ElectrAA.” He added that the inaugural meeting wasn’t only for current electric car enthusiasts, but those who were interested in the motor industry as a whole. “We want to attract the interested and curious to dispel some of the myths widely held about electric vehicles,” he said.

For many drivers, ensuring their car is as efficient as possible is crucial. Regardless of whether people have a DVLA registration or personalised number plates, fuel performance is important. With many more power points on the road, and the battery life of electric cars increasing, it’s likely more vehicles of this type will be seen on the road in coming years. And, for those interested, heading to the first Malvern ElectrAA meeting will be the ideal way to discover more.